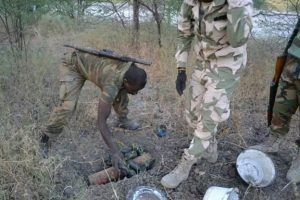 An explosion from a suspected Boko Haram landmine has left at least two staff of the Transmission Company of Nigeria (TCN) critically injured in Borno State.

The incident occurred when their vehicle ran into the landmine at Mainok in Kaga Local Government Area of Borno State and caused a huge explosion.

Naija News gathered the workers were on site to carry out some repair works on damaged facilities and restore electricity to Maiduguri and other areas when the incident occurred.

According to information made available in a statement by PR Nigeria on the matter, the blast occurred when a team of engineers from the TCN and Yola Electricity Distribution Company (YEDC) were on their way to some sites for repair work.

The statement noted that the injured staff have been evacuated to Maiduguri Teaching Hospital (UMTH) for medical attention.

A security source attributed the attack to leaked pictures on the activities of the TCN officials on social media towards the restoration of electricity in the affected areas of the state which have been cut off due to incessant attacks by the insurgents within the past month.

In other news, bandits have again attacked Kagara in Niger State, killing four and abducting 11, including seven children in different villages.

Sources from Kagara told Daily Trust that the armed bandits were said to have first struck at Gidan Adamu, near Yakila, headquarters of Gunna district.

The district head of Yakila, who was kidnapped many weeks ago, has remained in captivity till date.

The source said the bandits attacked another village called Gidan Wamban Karaku and abducted seven women, two of whom are nursing mothers.

They also rustled a large number of cows and headed to Madaka district, where they kidnapped the Imam of Rubo village.