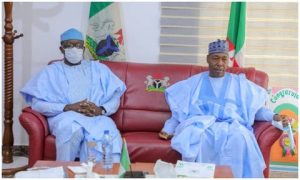 Governor Kayode Fayemi of Ekiti State, on Wednesday noted that Borno State Governor, Babagana Zulum, has the love of the people of his state at heart and will continue to identify with them despite threats to his life.

Fayemi added that Zulum was very details in his report to President Muhammadu Buhari on the Insecurity situation in his state.

The Chairman of Nigeria Governors’ Forum, stated this when he, alongside three other governors, paid an “empathy and solidarity visit” to the Borno State governor over recent Boko Haram attacks on his convoy.

Recall that Zulum’s convoy was attacked on Sunday by suspected Boko Haram terrorists.

The governor had left Maiduguri for Baga to prepare for the planned return of internally displaced persons from Maiduguri to the camps in Baga when his convoy was attacked to-and-from the area last weekend.

“This is not the first time you (Zulum) have been attacked, but you always said to me and to a lot of our colleagues that it is God that will protect. Even when we say to you, Prof, you have to be careful, you have to be vigilant, you have to protect yourself, you always reply by saying, what about the people? It is my duty, the primary responsibility I have as Governor is the security and welfare of our people and that is what you have been discharging,” Fayemi said.

The statement was titled, ‘Fayemi: When Governors engage Zulum on safety, he replies “what about my people?”’

It noted that Fayemi was accompanied by Sokoto State Governor, Aminu Tambuwal; Governor Atiku Bagudu of Kebbi State; as well as Simon Lalong of Plateau State.

Fayemi was quoted as saying, “Not long ago, you (Zulum) and I (Fayemi) had a meeting with Mr. President on these issues. You (Zulum) were very frank with Mr President about what is going on here, the difficulty that the military is experiencing, and the challenges that our people have in returning back to their communities. Your determination to ensure that the local population is returned so that they can go back to their farmlands, so that they can return to their normal lives.”

“In spite of all your efforts, in spite of the work you continue to do, it is obvious that we still have a lot to do as a country. As your brothers, we shall not relent in also expressing to the authorities, the importance of nipping this in the bud so that calm and peace return to Borno and this can serve as a vehicle for peace and development in the rest of our country.”

Zulum while reacting to their visit thanked the delegation. He also stressed that Borno was facing serious humanitarian issues, noting that it was important for displaced persons to relocate to their homes and continue their lives.