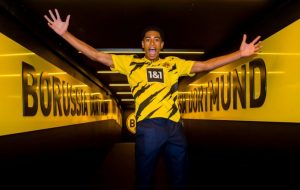 Borussia Dortmund has completed the signing of Manchester United target Jude Bellingham from SkyBet Championship side Birmingham City for an initial fee of £25m.

The 17-year-old English midfielder completed a medical in Germany on Thursday after the Black and Yellow persuaded him to move to Signal Iduna Park over Red Devils despite visiting Old Trafford in the past few months.

Dortmund released a video confirming the news via their official Twitter account, with players and staff from across the club singing along to ‘Hey Jude’ by The Beatles to welcome their new arrival after penning a five-year contract with Bundesliga giant.

Here are the series of tweets confirming john’s signing

I’m happy to announce that I will be joining Borussia Dortmund at the end of this season. I’m very excited about this next chapter of my journey at this great club and hope to achieve many successes in the future with my new teammates and for the amazing fans!

Get to hear from @BellinghamJude, our new #22