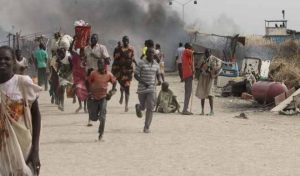 Gunmen suspected to be bandits on Saturday night attacked Gurmana in the Shiroro Local Government Area of Niger State.

It was gathered that the gunmen stormed the village shooting sporadically.

“They are currently shooting sporadically into the air and on target, which has resulted in many casualties.

“In the process of running away for safety, unspecified numbers of people have been drowned in River Kaduna,” a villager told SaharaReporters.

Recall that one student was killed and several other students abducted as armed bandits attacked Government Science College Kagara in Rafi LGA of Niger State.

The bandits also kidnapped some teachers and their family members residing within the College Staff Quarters.

According to a government source, the students and teachers were abducted at about 2:00 am on Wednesday when the bandits stormed the school.

The police have intensified their search in the forest as security sources hinted that the place those abducted were kept might have been located.