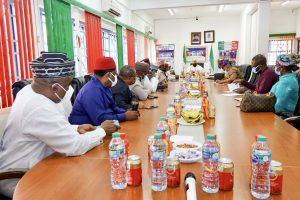 Members of the Peoples Democratic Party Reconciliation and Strategy Committee on Wednesday, February 17 held a closed-door assembly with former governors elected under the umbrella party.

Former President of the senate of Nigeria, Dr Abubakar Bukola Saraki disclosed this today in a post on his verified Twitter handle, Naija News reports.

Saraki who chaired the Reconciliation Committee disclosed that the meeting is being held behind closed-doors at the Legacy House Maitama Abuja.

His tweet reads: “This afternoon, members of the #PDP Reconciliation & Strategy Committee and I are at Legacy House in Abuja, meeting with a cross-section of former Governors elected under the platform of our great party, the PDP.”

This afternoon, members of the #PDPReconciliation & Strategy Committee and I are at Legacy House in Abuja, meeting with a cross-section of former Governors elected under the platform of our great party, the @OfficialPDPNig. pic.twitter.com/IOr0r2W8TI

Speaking to newsmen after the meeting, Saraki said the committee sought Jonathan’s counsel on how to go about strengthening the party, by reconciling aggrieved members.

He said: “Jonathan gave us his views and we are very happy. He reassured all of us of his commitment to the PDP and he told us that he is still ready to offer his time, experience and resources to strengthen the party.

“That is very strong and important for us. Of course, you know there are funny issues going on but we are leaving this place very happy.

“Jonathan is also ready to work with the reconciliation committee to play his own part. That is a great step for the party.”

The former Kwara governor also dismissed reports that Jonathan was plotting to join the All Progressives Congress (APC), adding that the former Bayelsa governor remains a PDP man.

Saraki disturbing Jonathan to defect to forget the thoughts.