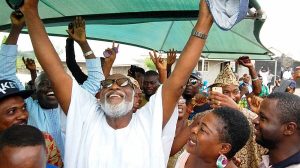 The governor of Ondo State, Rotimi Akeredolu, has emerged the winner of the governorship primary election of the All Progressives Congress (APC) in the southwest state.

Naija News reports that Governor Akeredolu emerged the winner of the Ondo APC primary election after defeating other aspirants including Chief Olusola Oke in all the local government areas in the state.

This online news platform understands that the Chairman of the Ondo APC Governorship Primary Election Committee and Governor of Kogi State, Yahaya Bello, will announce the overall results after adding all the votes.

Before the commencement of the election, three of the governorship aspirants, Jimi Odimayo; Ife Oyedele and Olusegun Abraham, withdrew from the race and declared support for Akeredolu.

The development means the incumbent governor will fly APC flag for the Ondo 2020 election.