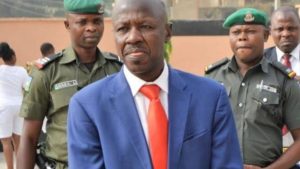 Police security attached to the suspended Acting Chairman of the Economic and Financial Crimes Commission (EFCC), Ibrahim Magu, have been withdrawn.

It was gathered that the Inspector General of Police (IGP), Mohammed Adamu, on Friday ordered the total withdrawal of Magu’s police security in his official and personal houses in Abuja.

The family of the embattled former EFCC Boss expressed worry as all vehicles in the official house in Maitama were also taken away.

A source in the family who asked not to be named told Premium Times that, “We are seriously concerned about the personal security of his (Mr Magu’s) immediate family. They have literally being thrown to the hyenas, knowing fully well the dangers.”

The source said the family is worried that in view of the “enemies” garnered by Magu on account of his work, his life and that of his family members are in danger without adequate security cover.

The president also appointed Mohammed Umar to act as chairman pending the outcome of Magu’s probe by a Presidential Panel.