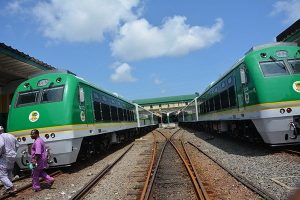 A head-on collision accident involving a moving train and a truck has been reported on Monday along the Jonathan Coker Road Level Crossing, Iju/Ishaga, Lagos State.

The accident was said to have occurred around 8.52 am and has caused heavy traffic build-up in the area, Naija News understands.

As at the time of filing this report, it was yet to ascertained if any casualty was involved but law enforcement agents are already at the scene and residents continue to troop to the scene.