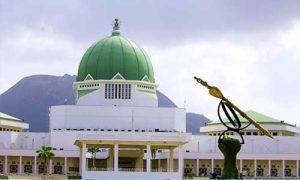 Olatunde, who was appointed in an acting capacity, will replace the sacked Mohammed Sani-Omolori.

This development comes a day after Sani-Omolori rejected the commission’s order which directed him to proceed on retirement.

Naija News recalls Omolori and 149 others were sacked by National Assembly Service Commission after attaining 60 years of age or 35 years in service.