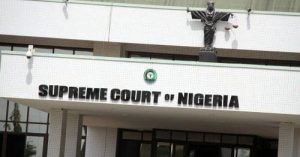 The National Judicial Council, NJC has released names of nominees for appointment as Justices of the Supreme Court.

The development is coming following a recommendation by the NJC for the appointment of 22 judges for the Supreme Court and various other courts in the country.

The nominees include Abdu Aboki, Mohammed Garba, Tijjani Abubakar and Mohammed Saulawa, Naija News understands. Giving an update on the development, the Director of Information of the National Judicial Council, Mr Soji Oye in a statement on Friday, August 14 confirmed that Justice Abubakar will represent the North-East Zone on the apex court’s bench, while Justices Garba, Aboki and Saulawa will as well represent North-West.