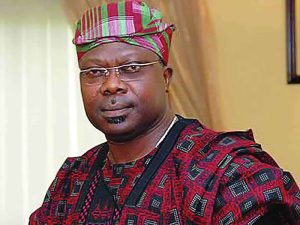 Former deputy governor of Osun State, Senator Iyiola Omisore has arrived at his hometown of Ile-Ife to defect to the ruling All Progressives Congress (APC).

Naja News reports that Omisore arrived at his polling Unit at Ward 6 in Ile-Ife at 12:40 PM with Osun State deputy governor, Benedict Alabi, the APC Caretaker Chairman, Prince Gboyega Famodun and other chieftains of the party.

The former Senator, who was the Peoples Democratic Party’s governorship candidate in 2014, lost out to Rauf Aregbesola of the APC in the election.

He also contested the same position in 2018 on the platform of the Social Democratic Party (SDP), but he came a distant third behind Senator Ademola Adeleke of the PDP and Adegboyega Oyetola of the APC.

Omisore later joined forces with Oyetola during the rerun election that resulted in the victory for APC.

Meanwhile, the spokesperson of the Nigeria Army, Brigadier General, Mohammed Yerima, has denied the report that the military is benefiting from terrorism.

Islamic cleric, Sheikh Ahmad Gumi, on Thursday alleged that military authorities are not interested in end terrorism in the country because they making billions of naira from it.

But during an interview, Yerima said the cleric is entitled to his opinions.

“I don’t know who the beneficiaries are, what is our benefit? Is he talking about buying equipment? Is it going to our pocket? It’s not, the equipment is to fight insurgency. I think it’s unfortunate, we respect him, we don’t want in any way to be confrontational with him.”