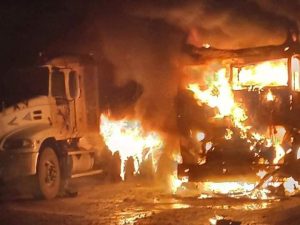 A tanker explosion that occurred on Tuesday morning in Abeokuta, Ogun State, has left one person dead and many vehicles burnt, Naija News understands.

It was gathered that the incident which occurred around 8:15 am on the Presidential Boulevard Road around Guarantee Trust Bank opposite Lawson Group School, was caused by a brake failure.

According to The Punch, the 33,000-fuel-laden tanker which was coming from Sagamu-Siun-Oke-Mosan Road climbed the overhead bridge but suddenly lost control while descending from the bridge.

It then hit a motorcycle that was in motion and rammed into some commercial vehicles waiting for passengers at the end of the bridge before exploding.

This resulted in motorists reversing to avoid the fire which had spread to a few offices around the place.

There was anxiety over the fate of some pupils who were in the vehicles around the place and in the school premises opposite the scene of explosion.

As of the time of filing this report, some officials of the Traffic Compliance and Enforcement Corps were seen at the scene controlling the traffic.