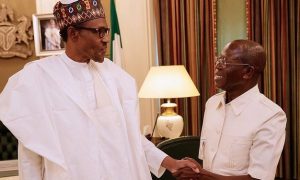 Adams Oshiomhole, the immediate-past National Chairman of the All Progressives Congress (APC), Nigeria’s ruling party, has stated his position on the dissolution of the APC National Working Committee (NWC) by President Muhammadu Buhari.

Naija News reports that Oshiomhole said he has accepted the decision of the National Executive Committee (NEC) to sack the party’s National Working Committee (NWC).

This online news platform understands recalls that Oshiomhole was a former Chairman of the APC NWC until Thursday when President Buhari dissolved the committee.

Reacting to the development, Oshiomhole, a former two-term governor of Edo State, south-south Nigeria and ex-chairman of the Nigerian Labour Congress (NLC), said President Buhari had two years ago invited him to come and reposition the APC and that “since the president has also agreed to the dissolution of the NWC, I am bound to obey him as the leader of the party.”

The former Edo State governor, who instructed his lawyers to withdraw lawsuit in court, assured President Buhari of his loyalty. “loyalty is put to test when the going is tough” Oshiomhole noted.