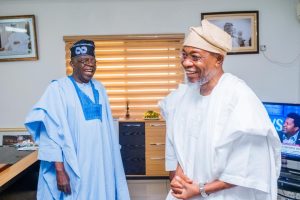 The National Leader of the All Progressives Congress (APC), Asiwaju Bola Tinubu has reportedly taken some steps against the political moves by Rauf Aregbesola, Nigeria’s interior minister and former governor of Osun State.

Naija News understands Tinubu on Tuesday afternoon, dissolved all political groups in the state not authorized by him.

The decision was announced at the meeting of the Governor’s Advisory Council (GAC) in Lagos.

This decision is coming as a result of the cold war between Tinubu and Rauf Aregbesola, TheCable reports.

Aregbesola was accused of launching and operating political groups in the state without the knowledge and approval of Tinubu.

These political activities are understood to have pitched Aregbesola against Tinubu as both politicians are said to have an eye on the 2023 presidential contest.