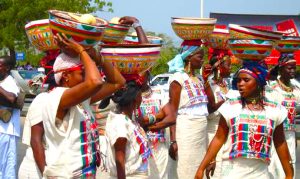 The Federal Government has revealed its plan to disburse N20,000 grants to at least 247 Fulani women to improve their economic sustainability.

Farouq while launching the Federal Government Special Cash Grant for Rural Women at the Fulani settlement of Hutawa in Kebbi State, said she was excited to see the Fulani women being educated on how to produce yoghurt in a modern way with cow milk.

This online news platform understands that the beneficiaries of the said grant are under the umbrella of Miyetti Allah Cattle Breeders Association of Nigeria (MACBAN).

“I am delighted to see that these Fulani women are being taught the modern methods of yoghurt production using cow milk,” said Farouq.

She added that the development will “go a long way in empowering them to be self-reliant and able to provide for their families.”

“I enjoin all the Fulani women who have received this training by the Kebbi State government to put it to practice as this will also improve the economic status of not just the women but also the state and country at large,” the minister reiterated.

Meanwhile, the Nigerian senate has disapproved the release of N98.4m to the Petroleum Resources Ministry for an awareness campaign.

Naija News understands that the ministry received queries after a 2015 report by the auditor-general for the federation, revealed the huge sum of money was released for the ministry just for flyer printing.