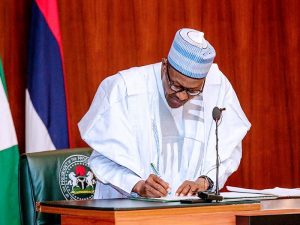 President Muhammadu Buhari has signed a new law that increases the minimum qualification for the position of Inspector-General of Police.

The Nigeria Police Act 2020 states that anybody who will be appointed as the IGP must possess a first degree or its equivalent.

However, the requirement for becoming Nigeria’s President is much lower than that of the IGP.

“Chapter VI, Part I, Section 131 of the Nigerian constitution states that a person may be qualified for election of the office of the president if they are a citizen of Nigeria by birth, have attained the age of 35 and have been educated up to at least school certificate level or its equivalent.”

Section 131, which was amended in 2018, reads in part, “A person shall be qualified for election to the office of the President if he is a citizen of Nigeria by birth; he has attained the age of 40 years; he is a member of a political party and is sponsored by that political party; and he has been educated up to at least School Certificate level or its equivalent.”

A bill seeking to make Higher National Diploma the minimum qualification for anyone aspiring to the office of the President or governor passed second reading at the Senate in March.

The bill also seeks to make the Ordinary National Diploma the minimum qualification for contesting for state and federal legislative seats.

The bill, sponsored by Senator Istifanus Gyang of Plateau State, is among the 10 constitutional amendment bills. The bills were referred to the Senate committee on constitution review for further legislative work.

It seeks to alter the constitution to provide for the amendment of Sections 65 (2) (a), 131 (d), Section 106 (c) and Section 177 (d) on minimum educational qualification for those seeking election as state or federal lawmakers, as well as governors, president and their deputies.

In the proposed amendments, those seeking to be president, governors, senators, members of the House of Representatives and members of State Houses of Assembly, must possess new minimum educational qualifications.