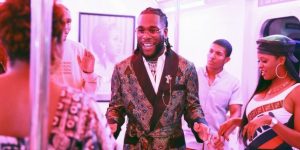 Nigerian Grammy Award Nomminee, Burna Boy‘s 5th and latest music album, Twice As Tall, has made it to Top 10 albums in the UK.

“Twice As Tall” makes it to top 10 albums in UK

The self acclaimed African Giant has got the whole world listening following the release of his 5th album.

The album has now made it to UK’s Top 10 Albums and that’s a big win for Burna Boy, his label, Diddy and Africa at large.

According to a tweet made by Official Charts and retweeted by Burna Boy, Twice As Tall is gradually climbing to UK Spot 1 as it is currently No.8 in the UK.

Official Charts tweeted… “Three more new releases could secure a Top 10 debut this week; British folk singer Kate Rusby is eyeing her first Top 10 with Hand Me Down at 6, Nigerian rapper and singer Burna Boy is at 8 with his fifth studio album Twice as Tall, and Rumer’s first country album Nashville Tears is at 9, possibly her first UK Top 10 album in eight years.”