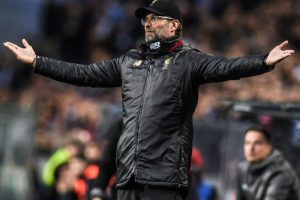 Liverpool manager, Jurgen Klopp has reacted to his team’s Carabao Cup loss against fellow Premier League side, Arsenal on Thursday.

As earlier reported by Naija News, Liverpool FC was sent packing from this season’s Carabao Cup tournament following their fourth-round defeat in the hands of Arsenal.

The two clubs battled to a 0-0 draw in regulation time, forcing the game into penalties. The Gunners thereafter defeated the Reds 5-4 on penalties.

Reacting to the final result, Liverpool boss Jurgen Klopp while explaining his club’s exit from the tournament, singled out Arsenal goalkeeper, Bernd Leno who saved two shots during the penalty shoot out and also saved some other shots during the game for praises.

“It’s difficult to be too positive about a game when you don’t win it, but actually it would have been a draw, and I think against Arsenal a draw is still a really good result,” Klopp was quoted by Liverpool’s official website as saying after the game.

“Then we lost the penalty shootout. We had the bigger chances in the game, so I think we did a lot of good things in this football game and that’s what you wish for as a manager when you send the boys out there.

“With that part of the game, I was pretty happy, with the performance I was happy. Yes, we could be a little bit more clinical in finishing, but Bernd Leno made a really good game, to be honest, so he could make a few saves.

“And in the end, the penalty shootout – the oldest story of football, it’s luck and a lot of things. Arsenal shot really well and us not the exactly same, and that’s why we lost.”

Meanwhile, the draws for the quarter-final stage of the Carabao Cup tournament was conducted on Thursday night.

The Gunners will now face holders Manchester City for a place in the semi-finals.

Manchester United will be away at Everton and Tottenham Hotspur travel to Stoke City.

All four quarter-final matches will be played on December 22 and 23.