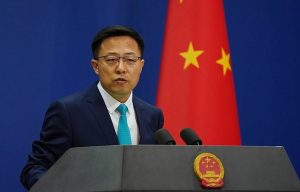 Chin the spokesperson for the Chinese Foreign Ministry disclosed on Wednesday, July 8 that China will henceforth not allow foreigners to interfere in the Tibetan affairs.

Naija News understands that the decision was coming following order of restriction placed on Chinese officials by the United States government on July 7.

Donald Trump’s administration yesterday, imposed travel bans on Chinese officials, noting that it will no longer allow foreigners’ to access Tibet. Reacting to the order, Lijian in the early hour of today told newsmen that China is banning United States citizens from entering its country over the same course, Tibet.

Meanwhile, United States Secretary of State, Mike Pompeo, had yesterday described as ‘human rights abuses’ moves by the Chinese government over Tibetan. Pompeo stated that the U.S. would on this note restrict visas for some Chinese officials because Beijing obstructs travel to the region by U.S. diplomats, journalists and tourists.

In another news, Brazilian President Jair Bolsonaro has tested positive for COVID-19 after downplaying the risks and pandemic nature of the virus, Naija News reports.

Bolsonaro who made the announcement yesterday revealed that he’s tested positive for COVID-19 but says he feels ‘perfectly well’ and has only mild symptoms.