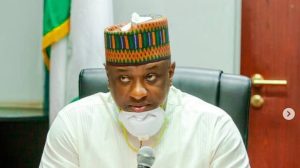 President Muhammadu Buhari has been called on by the House of Representatives, to direct the Minister of Labour and Employment, Chris Ngige, to act according to existing laws on the planned Special Public Works (SPW) programme.

The lawmakers on Tuesday noted that the constitution does not recognize the office of the Minister of State and also directed the Minister of Finance, Zainab Ahmed not to release funds contrary to that resolution.

The House of Representatives stated this following the motion of urgent public importance moved by the Deputy Minority Leader, Toby Okechuckwu on Tuesday.

Recall that the National Assembly and the Minister of State (Labour), Festus Keyamo, has been battling over the implementation of the N56billion special works programme.

Moving the motion, Okechuckwu said that 202 appropriation law recognizes “the National Directorate of Employment (NDE) Act as the implementation agency.”

He added that “Minister of State is not a creation of Section 145 (1) of the 1999 Constitution. This may, therefore, be the reason for the refusal of the Minister of State to be guided on the method adopted by Parliament for its proceedings and his assertion that “only Mr President can stop our work”, not our laws nor our institutions.”

Uzoma Abonta, while also speaking on the motion condemned the executive for disregarding existing laws by adopting short term interventions.