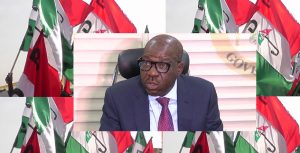 Governor, Godwin Obaseki has gotten a court approval to participate in the upcoming primary governorship election of the Peoples Democratic Party  (PDP)  slated for Thursday.

Naija News reported that Mr Obaseki had earlier been stopped by the court from contesting the election for allegedly submitting questionable certificates.

Mr Ogbeide-Ihama who instigated the case against the governor accused the governor of failure to meet up with the timeline stipulated to purchased the required forms to contest in the primary election.

However, giving his verdict the judges, E. A Obile, refused to grant the prayers of Ihama, stating that  the accounts of the court proceeding that stopped Obaseki yesterday were inaccurate.