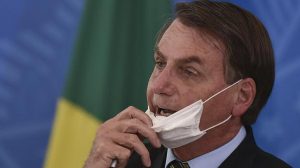 Brazil President, Jair Bolsonaro, has revealed the medicine that helped him to recover from the dreadful Coronavirus disease.

Barely three days after the president was reported to have tested positive for coronavirus, he took to his social media page yesterday to announce that he has recovered from the killer virus, adding that he took the popular Malaria drug, hydroxychloroquine.

Bolsonaro on Thursday, July 9 took to his Facebook page to again described the COVID-19 pandemic as mere flu. According to him, the disease is not as serious as it was pictured.

He further berated measures put in place by governor of states, health minister in Brazil to curb the spread of the pandemic, despite being the second highest with records of the killer disease across the world.

The president further challenged those against the use of malaria as a remedy for the novel virus to come out with another alternative.

He denied allegations of making propaganda of the hydroxychloroquine drug, adding that “let those who criticize it at least offer an alternative,”

Meanwhile, a South Africa professor, Shabir Madhi, in the last week revealed that the country will roll out its first COVID-19 vaccine trial in the next few days.