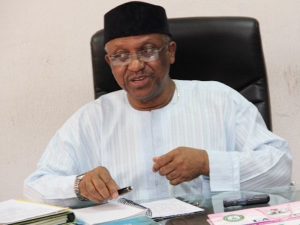 The Minister of Health, Osagie Ehanire, on Thursday, noted that majority of the Coronavirus deaths recorded in the country are above 50 years or have ailments like diabetes, cancer, hypertension, kidney disease and HIV.

Ehanire during the presidential task force daily briefing called on Nigerians in those categories to stay at home or wear face masks whenever they are going out.

According to the minister, visiting crowded places like markets and worship centres can expose one to COVID-19.

Ehanire stated, “I also stress that being in a closed room increases the risk of exposure to infection in proportion to the number of people and the length of time spent with them because the likelihood of the presence of a positive person increases with the number and infection with the time of exposure.”

“All persons in the vulnerable group who test positive should go to a treatment centre immediately, in their own best interest. A vulnerable person is not among those who should risk staying at home because complications can arise easily and suddenly or at an odd hour of the day or night when there will be no immediate help available.”

The Minister of Health further stated that any Nigeria who tested positive to Coronavirus and stays at home should move to a treatment centre at the first sign of fever or shortness of breath.

“A delay can be fatal because the disease progression can be unpredictable and faster than imagined,” he warned.

He said coronavirus was infecting more Nigerians, “including prominent members of the society. Friends and family have an increasingly important role to play in helping to guide compliance with this advisory.”

Ehanire added that the Federal Government would review the report submitted by the committee set up by the Kano State government over sudden deaths in the state.

He said that although the two reports were not totally far from each other, a certain percentage of the unexplained fatalities were due to COVID – 19.

Recall that the state governor, Abdullahi Ganduje, on Wednesday condemned the report of the Federal Government claiming that Majority of the strange deaths in Kano were caused by COVID-19.

“They are not totally far from each other because they do admit that a certain percentage of the unexplained fatalities were due to COVID – 19. There is a slight variation in the percentage that is attributed by either side. So, we are going to look at it but other factors that were brought in will be looked at and examined.”

Ehanire condemned the National Association of Resident Doctors for claiming that there is no adequate personal protective equipment in hospitals, describing it as incorrect.

He noted that he has made it a point of duty that protective equipments are distributed to all public hospitals across the country.

According to him, any hospital found to have a shortage of PPE was immediately attended to in order to remedy the situation.