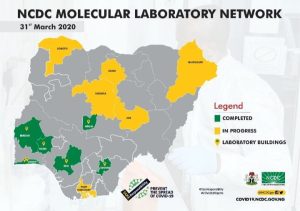 Four hundred and fifty-two new cases of Coronavirus disease was confirmed in Nigeria on Tuesday night by the Nigeria Centre for Disease Control, NCDC.

Cases of the dreadful virus have continued to rise in Nigeria following the relaxation of lockdown in various states as death tolls hit five hundred and thirty-three, Naija News reports.

According to the new update by the NCDC on Tuesday, June 23 at about 11:30 pm on its official Twitter account, a total of 7338 patients have been discharged from the novel virus, while 533 death cases were recorded since the outbreak of the killer virus in February.

The overall confirmed cases of the dreaded disease in Nigeria as at the time this report is given remains 21371, Naija News understands.

See below the breakdown of states with confirmed cases of COVID-19; including active patients, discharged patients and deaths recorded in Nigeria.

Meanwhile, the All Progressives Congress, APC, members in Oyo State has declared three days spiritual exercise for the former governor of the state, Abiola Ajimobi over his lingering illness.

According to reports, the fasting exercise under the aegis of the Oyo State Aspirants Forum was to seek God’s face for fast recovery of the former leader who has been for in a coma for days after testing positive for Coronavirus disease.