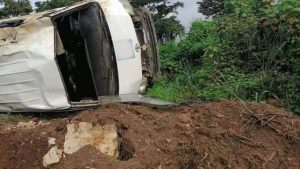 Daar communications team heading to Edo State ahead of the September 19 governorship election in the state have been involved in an accident around Auchi.

Information gathered revealed that three of their operatives, including reporter, Omor Bazuaye, are reported to be seriously injured.

Daar communications are the owners of African Independent Television (AIT) and Raypower.