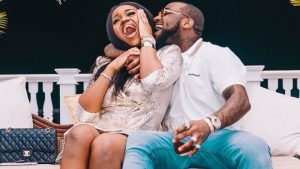 Adewale Adeleke, HKN boss has disclosed the situation of things between his brother, singer Davido and his fiancee Chef Chioma.

According to him, the love birds are still together.

Adewale gave the clarification following suspicion raised last week that the both of them parted ways, due to the crisis their relationship had been facing in recent times.

SDK had shared a report indicating that the love birds no longer live in the same house and are presently not in good terms.

Some rumours even had it that Davido beat Chioma, following her discovery that he was having a baby with his fourth baby mama.

“Oh yes, they are still together” he said.