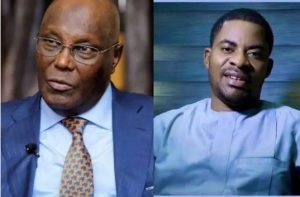 Deji Adeyanju has taken to the micro-blogging site, Twitter to berate the 2019 Presidential candidate of the Peoples Democratic Party (PDP), Atiku Abubakar, for keeping mum on the death sentence passed on Kano musician.

Naija News reports that a 22-year-old Musician, Yahaya Sharif-Aminu, was sentenced to death by an Upper Sharia Court in Kano State on August 10, 2020. The musician, who is a resident of Sharifai in Kano metropolis, was accused of committing blasphemy against Prophet Mohammed in a song he circulated via WhatsApp in March 2020.

Apparently furious with the lyrics of the Kano musicians song, Irate youths burnt down his family home and led a protest to the Sharia Police, Hisbah, demanding Sharif Aminu’s death. The musician, who went into hiding, was arrested, hurriedly tried and convicted for breaching Section 382 (b) of Kano penal code of 2000 which is based on Islamic law.

Since the death sentence, Nigerians, both Christians and Muslims, have taken to several social media platforms to condemn the sentence on the Kano musician with some calling on President Muhammadu Buhari to intervene on the judgment.

However, speaking amid the death sentence passed on the Kano musician on Saturday, Atiku took to Twitter to congratulate English Premier League side, Arsenal FC for defeating Liverpool to win the Community Shield.

Displeased with the tweet amid the death sentence passed on the Kano musician, Adeyaju, a former Director of New Media of the PDP, berated Atiku for commenting on Arsenal but keeping mum on the judgment sentencing the Kano musician to death.

Adeyanju tweeted: “Where’s Atiku & other presidential aspirants who always have opinions on every issue or they don’t want their fellow Muslims to condemn them?“

Where’s Atiku & other presidential aspirants who always have opinions on every issue or they don’t want their fellow Muslims to condemn them? https://t.co/zVhlJD3Y1K