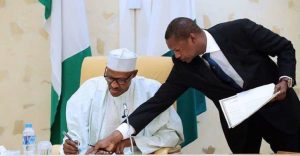 The Attorney-Gen­eral of the Federa­tion, Abubakar Malami, has urged President Muhammadu Buhari to disband the Pres­idential Advisory Committee Against Corruption (PACAC) headed by Prof. Itse Sagay.

According to a presidency source who spoke with Daily In­dependent on Sunday, Malami’s reason for the committee to be scrapped is that it is no longer relevant to the fight against corruption.

The source added that Malami asked Buhari to disband PACAC as he did with the Special Presidential Investigation Panel for the Recovery of Public Property (SPIP) formerly under the supervision of Okoi Obo­no-Obla.

“The minister has made some recommendations, one of which is the disband­ment of PACAC. It, however, remains to be seen whether the president will approve of it or not,” the source said.

When contacted, Malami, who spoke through his media aide, Dr. Umar Jibrilu Gwandu, said only the President can determine whether PACAC is still useful or not.

He said: “PACAC is a presidential committee established by the presidency long before the appointment of Abu­bakar Malami, SAN, as the Attorney General of the Federation and Minister of Justice and his assumption into office in 2015.

“The fate of the existence or otherwise of the commit­tee is an exclusive preserve of the presidency regardless of whether it outlives its useful­ness or not.”

Trouble began be­tween Malami and PACAC over the committee mem­bers’ belief that the minis­ter was interfering in some of their works, especially on their report on some corrupt Nigerians.

The committee also in­curred Malami’s wrath when it declared public support for the reappointment of Ibra­him Magu, former acting chairman of the Economic and Financial Crimes Com­mission (EFCC).

However, Malami, in a memo to President Buhari, accused Magu of a myriad of contraventions, especially “diversion of recovered loot, insubordination and miscon­duct”. He further said that Magu was not transparent enough in the management of the recovered assets.

Magu was later probed and found guilty of the charges leveled against him by the Justice Ayo Salami panel which recommended his sack.

The president, thereafter, appointed Abdulrasheed Bawa, the Lagos zonal head of EFCC, as the substantive chairman of the anti-graft agency.

Following Bawa’s confir­mation by the Senate, Sagay had said Malami, as the per­son who recommended him for the position, will interfere in his work and will not allow him to operate.

Responding, the minister said Sagay is “a confused old man whose vision is becloud­ed by speculations and guess works.”