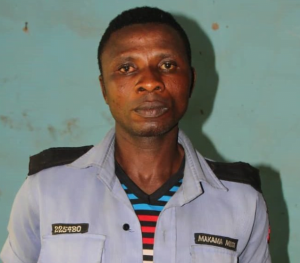 Bauchi State Command of the Nigeria Police Force (NPF), has announced the arrest of a former officer for allegedly involved in impersonation and stealing of motorcycles in the state.

It was reported that the dismissed officer whose identity is revealed as Makama Musa, an indigene of Gombe State was arrested following complaints from residents that the former security agent uses the force’s uniform on major roads in the community to steal from passersby.

Speaking on the development, the Public Relations Officer of the state’s command, DSP Ahmed Mohammed Wakil, revealed that Musa was arrested by a team of policemen attached to Yelwa Police Station on Thursday, June 24.

According to Wakil, the former sergeant was apprehended along Dass road wearing the force’s uniform.

“The suspect confessed to the crime and the following exhibit was recovered from him; Neon blue shirt and black trouser. Device rank of sergeant and Police badge. Boxer motorcycle with number plate DBM-319-UR, Bauchi,” Wakil revealed.

“The Commissioner of Police directed that the case should be transferred to SCID for discreet investigation after which the suspect would be charged to court for prosecution/possible conviction.”