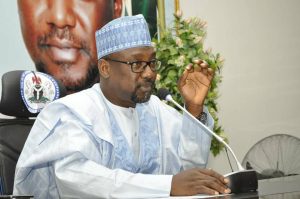 Governor Abubakar Sani Bello led government of Niger State has admonished parents to allow their children to go to school and not give in for fear of bandits.

Naija News understands that Niger has witnessed a series of attack by bandits in recent time, one of which involved the abduction of students from the Government Science College, Kagara.

Reports reaching Naija News revealed that the armed men stormed the school on Sunday night but met the place empty. The bandits, who were said to be targeting large-scale abduction, reportedly left the school in anger and moved to a nearby community where seven persons were said to have been abducted.

Reacting to the disturbing developments, the state government admonished parent not to allow the abduction of students in the state to discourage them from sending their wards to school.

Addressing the parents while handing over the released students who were abducted from Government Science College, Kagara to their relatives in Minna, the State Commissioner of Education, Hajiya Hanatu Jibrin Salihu said the government has promised to secure all its schools from all criminal elements to allow students and pupils to pursue their education.

Speaking on behalf of the state governor, Salihu said the government has put in place measures to ensure that schools are safe in the state especially the boarding schools.

“We are in contact with the SS3 students and working out how best we can help them so that they will write their exams. And I am sure at the end of the day, we will come out with something productive for them”, she said.