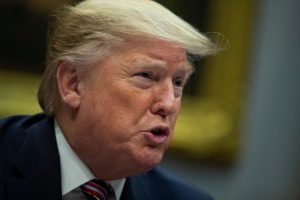 US President Donald Trump said Thursday evening that he condemned “all white supremacists” after the controversy born out of his ambiguous words during his debate against his Democratic opponent, Joe Biden.

“I condemn the Ku Klux Klan, I condemn all white supremacists, I condemn the Proud Boys”, he added, referring to this nationalist group that he had called, during his debate against Democratic candidate Joe Biden, to “be ready”.

Called Tuesday evening by journalist Chris Wallace to explicitly condemn white supremacists, the tenant of the White House had dodged.

He then called on the White Boys to “Stand Back, Stand By””

Visibly delighted with the presidential wording, the paramilitary group immediately adopted the slogan, posting a logo on social networks with the words “Stand Back, Stand By”.