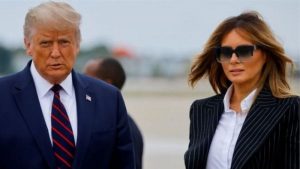 US President Donald Trump announced on the Thursday night that he had tested positive for COVID-19, just like his wife Melania, and that they were going into quarantine.

“Tonight, the first lady and I tested positive for COVID-19,” tweeted the president of the world’s first power. “We will begin our quarantine and the recovery process immediately. We will get through this TOGETHER! “, he added.

The announcement was made hours after Hope Hicks, a close adviser, tested positive for COVID-19. Hicks was aboard Air Force One with the President when he travelled to Cleveland, Ohio on Tuesday to participate in the debate against Joe Biden. She also travelled with him on Wednesday when he made a trip to Minnesota for a campaign rally.

The US president has suggested that his advisor may have contracted the virus through contact with soldiers or law enforcement officials.

“It’s very, very difficult when you are with members of the military, or the police, for them to come towards you; they want to hug you because we’ve done a really good job for them, ”he said. “She knows there is a risk, but she is young,” he added.

The US president regularly submits to COVID-19 tests even though the exact frequency of these tests is not known.

Employees who work in the “West Wing” are tested daily, like journalists who go there or travel with the president.

Hope Hicks, who joined the real estate mogul’s campaign team early in 2016, is part of the president’s inner circle.

After having occupied the prestigious position of director of communications for the White House, she had left her post for a time to join the Fox group, which heads the Fox news channel, before returning to Pennsylvania Avenue.

Discreet in the media, but very influential behind the scenes, this former model, who had worked for Ivanka Trump in New York, has always had the ear of the president.

The pandemic has killed more than 207,000 people to date in the United States, by far the most bereaved country in the world.

The management of the epidemic has earned Donald Trump very strong criticism, from his opponents, but also from scientists and some elected officials from his own camp.

He is accused of having sent mixed and confusing signals, but also of having lacked compassion in the face of the devastation caused by this virus.

Poll after poll, a very large majority of Americans severely judge its action on this front