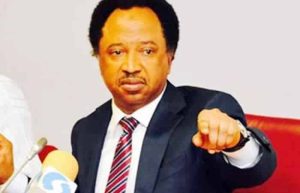 Former Kaduna Central Senator, Shehu Sani has called out those trying to defend the criminal activities of armed bandits in Nigeria.

This is as he warned that the thin line between dialoguing and negotiating with bandits for the sake of peace and justifying their atrocities must not be crossed.

He added that even if the bandits have any grievances, killing and kidnapping innocent citizens is not the solution to their issues.

Sani spoke against the recent backdrop of increased kidnappings and killings by armed bandits in various parts of the country but particularly in the North.

On Tuesday, he wrote on Twitter: “Those who believe in or supports dialoguing with the armed Bandits for peace should avoid the thin line of defending or justifying their murderous acts and systemic atrocities. Be not possessed or hypnotized by the blood on their hands.”

Earlier on Monday, the Senator had also written that: “Bandits have no grievance other than rabid crave for criminality, and violence; even if they have grievances, killing and kidnapping innocent poor people is not the path to addressing it. Let this be clear.”

It will be recalled that last week, renowned Islamic cleric, Sheikh Ahmad Gumi revealed that herdsmen were not always criminals and kidnappers but were forced into the act as a form of self-defence.

According to him, it was when herdsmen became victims of cattle rustling that they learnt some of their current acts to be able to defend themselves.

Recently while reacting to the Kagara school abduction in Niger State, the cleric urged the Muhammadu Buhari-led government to grant ‘blanket amnesty’ to bandits.

Speaking to reporters after meeting with Governor Sani Bello of Niger State on Friday in Minna, Gumi advised the federal government to extend amnesty to bandits as it was done to Niger Delta militants.

The cleric asked the government to arrest and prosecute any bandit who goes ahead with criminal activities after amnesty has been granted.

Meanwhile, the Minister of Information and Culture, Lai Mohammed, says abduction of schoolchildren does not only happen in Nigeria but also in developed countries.

Speaking on Monday night on Channels Television‘s “News Night” programme, Mohammed said the abduction of students was not peculiar to Nigeria alone.

The minister said cases of abduction of schoolchildren have happened in the United States and other developed nations of the world.

Mohammed noted that one of the ways to curb the abduction of soft targets is through intelligence gathering and surveillance rather than the physical presence of soldiers or policemen in schools.

He, however, said the Federal Government would not pay ransom to secure the release of the abducted students and staff of the Government Science College, Kagara, Niger State.