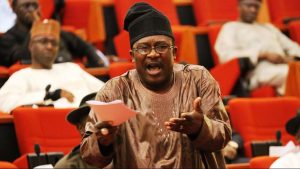 The lawmaker representing Kogi West Senatorial district, Smart Adeyemi, on Tuesday, steered reaction in the senate over his comment describing the Governor of Abia State, Okezie Ikpeazu as a “champagne drinking man”.

The lawmaker stated this while reacting to a post on social media allegedly linked to Senator Enyinnaya Abaribe, who is from Abia.

It was reported that Abaribe in the post attacked the governor of Kogi State, Yahaya Bello.

Abaribe while reacting to the statement of Adeyemi said he is surprised that the lawmaker is making reference to a statement he did not make.

Adeyemi said while some governors were committed to the welfare and protection of their people, leaders in Abia State “are governed by drunkards”.

The Senate President, Ahmad Lawan, however, cautioned him against insulting the governor.

Abaribe who was not pleased with the statement of his colleague charged him to tender an apology to the governor of Abia.

Abaribe said: “Mr President, I will like to make a clarification. Unfortunately, what has happened here today is one of the problems that you see on social media. I never made any comment on the governor of Kogi State. Never!”

“What has happened is what we see going on today. People write something and tag your name to it. And if you don’t ask a question, you will not know whether you actually said it or not.”

“And I see so many things tagged to me but I don’t talk. The last time I saw Nuhu Ribadu, I also spoke to him. Something was ascribed to him that was very deleterious.”

“I’m very surprised that my good friend and colleague decided to take on the governor of Abia for something I never said.”