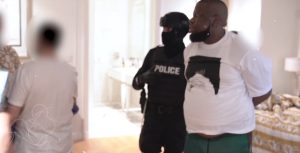 Dubai Police authorities have released a video of how Raymond Olorunwa Abbas, better known as Hushpuppi and Olalekan Jacob Ponle popularly known as Mr Woodbery were arrested for fraud.

Naija News had reported earlier that Hushpuppi, a Dubai based Nigerian big boy was arrested for an alleged $35 million by Interpol and the Federal Bureau of Investigation (FBI).

This online news platform recalls that a short video clip published on the micro-blogging site, Twitter, had its caption suggesting that Hushpuppi was arrested alongside his close friend and alleged accomplice, Woodberry from their palatial home in Dubai, the United Arab Emirates (UAE).

The reports at the time of their arrest two weeks ago had said that Hushpuppi and Mr Woodbery’s arrest was as a result of months of investigation by the FBI following a fraudulent deal that involved Hushpuppi and his crew. The caption of the video said Hushpuppi and his crew collected the sum of $35 million for Coronavirus (COVID-19) ventilator.
However, two weeks after their arrest, Dubai Police on Thursday confirmed the arrest of Dubai based Nigerian internet fraudster. The Dubai Media Office said two Nigerians and 10 others were arrested in an operation tagged “Fox Hunt 2”.

The Dubai Police said the raid resulted in the seizure of incriminating documents pertaining to a well-planned international fraud worth Dh1.6 billion (N168,823,414,720.00).

Speaking on the arrest, the Commander-in-Chief of Dubai police Abdullah Khalifa Al Marri said: “The arrest of ‘Hushpuppi,’ ‘Woodberry’ & 10 gang members involved in money laundry & cyber fraud activities, is another achievement added to the proud record of Dubai police in ensuring the emirate’s security and safety.”

Watch the video below…