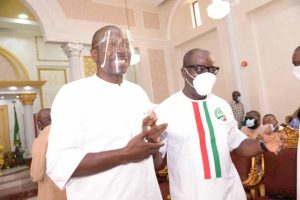 The Oba of Benin, Ewuare II, has helda peace meeting/talk with the leadership of both the All Progressives Congress and the Peoples Democratic Party in the State ahead of the September 19 poll.

Speaking at his palace on Wednesday The monarch begged both parties to stop heating up the polity, adding that they must put the interest of the state first.

He also asked leaders of the Peoples Democratic Party (PDP) and the All Progressives Congress (APC) to emulate ex-President Goodluck Jonathan who congratulated President Muhammadu Buhari after losing the 2015 polls.

The revered traditional ruler expressed his displeasure on how the state has been projected  in the news for the wrong reasons.

Oba Ewuare admonished the political actors to avoid heating up the polity, adding that they must put the interest of the state first.

The custodian of the Benin culture is shocked that the relationship between Oshiomhole and Obaseki, which was very close and thought to bring peace and tranquillity and progress to the state, has turned sour bringing bad image to the state.

here are the pictures and Video of the peace meeting

1.
Earlier today, I and other political actors in Edo State were invited to the palace of the Oba of Benin, His Royal Majesty (HRM), Omo N’ Oba N’ Edo Uku Akpolokpolo, Oba Ewuare II. pic.twitter.com/JCz8PJzNzr

3.
HRM sought for assurances from all political gladiators and a halt to the rising shooting and violence in the state and ensued for peace between one and all. pic.twitter.com/d6hmhGDHTr

4.
On my part, I assured the royal father that as the Executive Governor and Chief Security Officer of the state, I have sworn to uphold the constitution of the Federal Republic of Nigeria and protect the lives and property of our people. pic.twitter.com/njJxvluzrY

5.
Having committed enough resources to ensure safety of the citizens of our state, I will never encourage violence, as it would be irresponsible of me to do anything which would lead to the breakdown of law and order. pic.twitter.com/CheushtaWK

Earlier today, at the peace meeting summoned by our father, Oba n’osa, Oba Ewuare II, I reiterated the APC’s commitment to a peaceful electoral process. As a goodwill gesture, I warmly embraced @GovernorObaseki. Violence has no place in democratic elections. #EdoMustMoveForward pic.twitter.com/I1ook7kbIr

I am grateful to our father, the Oba of Benin, Oba Ewuare II, for his fatherly intervention and timely call for peace. Ovbi’Oghonwan nei bun aro – Oba gha to kpere, ise! #EdoMustMoveForward pic.twitter.com/7IJ67hTXr5