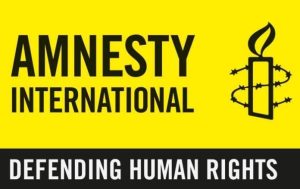 A call has gone out to the federal government of Nigeria under the leadership of President Muhammadu Buhari to ensure a level playing field in the forthcoming governorship election in Edo State.

The call was made by human rights organization, Amnesty International which noted that it is noticing signs of violence ahead of the September 19 governorship polls in the state.

To this end, it called on the government to take decisive action in dealing with any person or group that may be planning to unleash violence before, during, or after the state governorship elections.

The call is contained in a statement on Wednesday by Osai Ojigho, Country Director, Amnesty International Nigeria in which the organization called for peaceful conduct of the guber polls.

The statement reads: “Government must protect people from violence and ensure the full respect for freedom of expression, peaceful assembly and association before, during and after the state’s upcoming gubernatorial election and subsequent elections in other states of the federation.”

“The potential turmoil being stirred up by various factions ahead of the gubernatorial election in Edo State should send a clear signal to the Nigerian authorities of the imminent violence ahead of the polls and government must take active steps to prevent a bloody poll.”

“Fueling the instability and impunity in the state, are reports of supporters of some politicians violently targeting political opponents, real or perceived. The authorities must stamp out any potential impunity by ensuring these incidents are investigated and those suspected to be responsible, brought to justice,” he added.

AI demanded the government must ensure all stakeholders are able to carry out their duties as regards the election without fear of intimidation or harassment from any quarters.

“The authorities must put measures in place to ensure politicians and their supporters do not infringe on human rights. They must announce clearly that there is zero-tolerance for human rights violations and that anyone suspected of wrongdoing will be brought to justice.

“The authorities must also ensure that journalists, international and national civil society groups and agencies that will monitor the elections are able to do so in safety,” Osai Ojigho added.