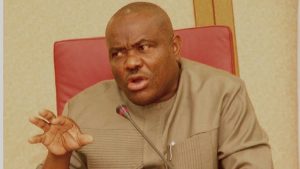 All Progressive Congress chieftain and former governor of Lagos State, Asiwaju Ahmed Bola Tinubu has been countered by Chairman of the Edo State governorship election National Campaign Council, Governor Nyesom Wike, over his recent statement which alleged that Governor Godwin Obaseki is not a democrat.

Wike who noted that Tinubu is one of the politicians he highly esteemed in the country said he, however, disagreed with his comment against candidate of the Peoples Democratic Party in the Edo State 2020 governorship race of not being a democrat.

The Rivers State Governor in his final media interview ahead of the Edo State September 19 governorship election said Tinubu cannot determine if Obaseki is a democrat or not. According to him, only the people of Edo can determine and decide if they want Governor Obaseki or not.

Again he assured that without the interference of the Federal government and its agencies, Governor Obaseki will emerge winner of the Saturday’s election squarely.

He said, “I will say it anywhere, Bola Tinubu is one of the politicians I respect highly. Going by what happens in Lagos that one person determines everything, it can be allowed to happen in Edo. You cannot allow that.”

He added, “If it is by popular voting we can go and sleep knowing that the election is over but because we know that it is not over because they are relying on the federal government that is why I am calling on all Edo persons to take this election as their own contribution to the development of Edo State”.

Meanwhile, the Ondo State Deputy Governor, Agboola Ajayi has denied any plan to team up with the Peoples Democratic Party (PDP) and its governorship candidate, Eyitayo Jegede ahead of the 2020 governorship polls in the state.