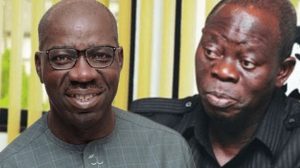 Edo State Governor, Godwin Obaseki has accused his predecessor and former national chairman of the All Progressives Congress (APC) Comrade Adams Oshiomhole of stealing N30bn from government coffers through a ‘fake’ water project.

Speaking on Monday while inspecting the Textile Mill Road catchment of the project, in Benin City, Obaseki labelled the N30 billion Benin stormwater project executed by the Oshiomole administration as a deliberate ploy to scam the people of Edo State.

He thereafter promised to “recover all the money due to Edo people that was stolen through this project.”

The Governor noted while commenting on what was done by the previous administration that the project was never designed to be successful but just to syphon government money.

He however made a fresh promise to the people of Edo that his government will execute the project and on completion, it would drain water from the area and restore the property of Edo people living in that area.

He said, “You can see for yourself that the so-called stormwater project was a fraud; it was a contract to defraud Edo people. From what I can see now, the stormwater project in this catchment area was never designed to take water away from the area. The area was never drained. You can see the level of what we are doing now as compared to that of the previous administration.

“It is almost a two-meter difference. There is no way you can drain water from a low land into a higher ground. We say we have experts and paid over N30 billion for this project. The person that supervised this project today calls himself a minister supervising bigger projects for the Federal Government. This is not acceptable.”

Obaseki added that the previous administration must be probed and made to account for how N30bn was spent on the project without achieving anything.

“They spent N30 billion claiming that they want to take away the suffering of Edo people, de-flood the area and restore value to the people’s property. Look at what has happened now to this project for five years?

“With what we have done now with less amount of money, we are going to finally drain this area and bring back life to the people in this catchment area. I don’t like probing but this time, we have to set up a panel to get the facts of what happened. We can’t throw away such a huge amount of money. People must be made to account for their time in service in government.

“They have to explain to us how they spent the N30 billion on a project they claim will drain water from a community. But the project drains the water to nowhere. They have the boldness to claim that we abandoned the project which was never made or designed to work in the first place.

“Clearly, we will take the necessary precaution to recover all the money due to Edo people that was stolen through this project,” Obaseki vowed.

Meanwhile, South West Governors have slammed the Senate President, Ahmad Lawan, for accusing them of inciting the recent ethnic violence, which erupted in some states in the region.

Naija News reports that Lawan, in an interview with the BBC Hausa Service, said the governors caused the crisis in some Southwest states through their unguarded utterances.

He described what happened in Shasha market in Ibadan, Oyo State where Hausa and Yoruba traders clashed, as a failure of leadership.

But in a statement on Monday by his media aide, Olabode Olatunde, Chairman of the South-west Governors’ Forum and Governor of Ondo State, Rotimi Akeredolu (SAN), berated the Senate President for his comments.

The governor described the statement credited to Lawan as unnecessary and uncalled for, adding that the Senate President should be working towards the unity of the country and not tearing it apart.