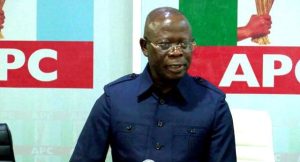 Reactions have continued to trail yesterday’s defeat of All Progressives Congress (APC)’s Osagie Ize-Iyamu and his political godfather, Adam’s Oshiomhole.

The election was majorly contested between the candidates of the All Progressives Congress (APC) Pastor Osagie Ize-Iyamu and the incumbent governor of the State, Godwin Nogheghase Obaseki of the Peoples Democratic Party (PDP).

The final result was announced by the Independent National Electoral Commission (INEC) revealed Obaseki to have defeated his main opponent by 84,336.

Obaseki won in 13 Local Government Areas while Ize-Iyamu secured victory in only 5 LGAS out of the 18 in the state.

Reacting, Nigerians took to Twitter to mock Ize-Iyamu and especially his godfather Adam’s Oshiomhole who had done everything possible to ensure Obaseki loses the election.

“While I have kept my cool and ignored all the verbal attacks directed at me by the suspended chairman of @OfficialAPCNg, Mr Oshiomhole, I have always known that a day is coming when his masquerade will dance naked in the market square.” -HE Dr. @bukolasaraki 12/05/2020

This was when @GovernorObaseki took the courageous decision to deal with the Godfatherism of Oshiomhole.

And that decision turned out to be favorable.

Is Obaseki really that popular ? When did he start building his political structure ? Is this a people’s movement against Oshiomhole ? He only moved to the PDP a few nights ago. Is there something an “Ambode” in Politics should learn ?

The @OfficialPDPNig is coasting to an easy victory in Edo, going by official @INECNigeria results so far released. The forces of godfatherism are being shamed. Oshiomhole and Bola @AsiwajuTinubu now know that Edo is definitely not Lagos!#EdoDecides #EdoElection #BuhariTormentor

My detest for Oshiomhole’s politicking is deep rooted to how he made me believe he was a Nigerian hero with theatrics he played as the NLC chairman.

Mans fooled a whole nation, until Obasanjo said “don’t mind them o. They will wear khaki in the afternoon, and agbada at night”

So, about 42 political appointees working for Obaseki dumped him and joined Oshiomhole and other rebels, yet he triumphed.
Edo state is truly not Lagos. #EdoNoBeLagos

He drink orhue with salt &water

When you ask @A_Oshiomhole how he is feeling this morning

Now that the wannabe godfather @A_Oshiomhole has been ousted from office and buried politically, what’s the way forward for these 12 wayward boys that refused to present themselves to be sworn-in as members of the Edo State HOA?

In just three months, the political career of Adams Oshiomhole has suffered a huge setback.

Edo still in celebration mood!!
A leader should Never underestimate the Resolve of a people.
The only time Edo was ever in this mood was on 11th November 2008 when the Court of Appeal declared @A_Oshiomhole winner against @OfficialPDPNig Gov Oserheimen Osunbor.

My greatest regret is that Tony Anenih did not live to see the downfall of Adams Oshiomhole’s yeye kingdom in Edo state pic.twitter.com/VzwlHocSbU

Shows APC had no regards for Edo pple at all. POI stood a better chance of winning if these rogues were not associated with him.

If an Entire Village cooks for you,you can never finish it.

The Rickety Boat by the Riverbed is owned by Someone.

Deities carved from wood are careful around fires.

An Overfed Man that challenges his god to a fight gets trampled.

Shows APC had no regards for Edo pple at all. POI stood a better chance of winning if these rogues were not associated with him.

Within few months, @A_Oshiomhole lost the Party Chairman’s seat and also lost the grip of his state to Obaseki

Welcome to the league of losers but before I open the door for you, there are rules &you must respect those you met in the house!

You love what Obaseki did to his benefactors in Edo, wait for it in your own life. Your beneficiaries will give you same treatment, even worse.

Life is about reaping what you sow. Traitors must have traitors behind them.

Meanwhile, Adams Oshiomhole has refused to comment on the defeat till now.