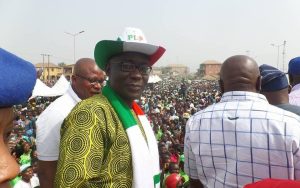 Philip Shaibu, Deputy Governor of Edo State, has today recalled how Adams Oshiomhole, the Immediate past National Chairman of the All Progressives Congress, campaigned for the state Governor, Godwin Obaseki.

He further recalled that Oshiomhole even described Obaseki as a team player who knows the value of a family.

Shaibu said Oshiomhole had already popularised Obaseki, even before he turned against him .

While rating the state governor and his opponent Pastor Osagie Ize-Iyamu, the governorship candidate of the APC, Shaibu said that Oshiomhole has already helped make Obaseki popular