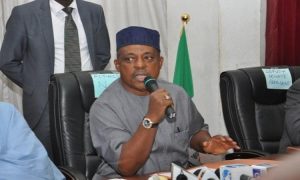 The Peoples Democratic Party’s Governors have vowed not to leave Edo State despite the alleged intimidation by security operatives.

The Nationa Chairman of the PDP, Uche Secondus, during an emergency press conference in Abuja on Saturday, accused security agencies of harassing and threatening the lives of its Governors who are in Benin City, the state capital, ahead of Saturday’s poll.

This is coming after the party’s chairman in Rivers State, Akawor Desmond, claimed that over 300 policemen laid siege to the hotel where Governor Nyesom Wike was staying.

Secondus, expressed shock that, “security agents were detailed to surround the lodging of our governors to harass and intimidate them.”

He questioned why APC governors, “including the governor of Kano State, Abdullahi Ganduje; his Imo State counterpart, Hope Uzodima as well as the Deputy President of the Senate, Senator Ovie Omo-Agege, are left free in the comfort of the GRA, Benin residence of Comrade Oshiomhole.”

The PDP insisted that, “there cannot be two sets of laws for the citizens of our nation.”

“Inasmuch as the APC governors are given liberty to stay in Benin City, our governors will not allow themselves to be harassed or stampeded to leave the state.”