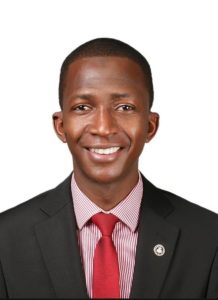 The newly appointed Chairman of the Economic and Financial Crimes Commission (EFCC), Abdulrasheed Bawa has been promoted to level 14 ahead of his appearance before the Senate for his screening.

The new promotion puts him on the rank of Chief Detective Superintendent which is a major requirement for the appointment of an EFCC boss according to Section 2 of the EFCC Act.

The act states that a person who will be appointed as chairman of the commission must have at least 15 years of experience and must be the rank of an Assistant Commissioner of Police or its equivalent.

However, Bawa, who was last week appointed by President Muhammadu Buhari to replace Ibrahim Magu was on Grade Level 13 and a Deputy Chief Detective Superintendent when he was nominated for the post.

This prompted a lawyer, Osuagwu Ugochukwu, who filed a suit before the Federal High Court in Abuja seeking to stop the Senate confirmation of the chairman-designate.

The court document marked FHC/ABJ/CS/196/2021 was received at the Office of the Senate President on Thursday.

But with the new promotion, the coast is now clear for Bawa’s screening and expected confirmation by the Senate.

It was learnt that the chairman-designate and his coursemates from the pioneer Course 1 of the EFCC Cadet Officers were given promotion letters with immediate effect.

It was also gathered according to a source who spoke to Punch that the pioneer Course 1 of the EFCC Cadet Officers were supposed to have been promoted over a year ago but their promotions were being delayed by the police-led leadership of the commission.

He said, “Bawa and his course mates have been promoted to Level 14. Hopefully, this will put to rest the controversy surrounding his eligibility for the role of EFCC chairman. I agree that the promotion should have been effected before his appointment was announced as this would have prevented unnecessary controversies.

“The truth is that he has been overdue for promotion.”

In a related development, it was learnt on Saturday that the Presidency is seriously considering appointing a new secretary for the EFCC to replace Mr Ola Olukoyede who is still on suspension following his alleged involvement in abuse of abuse and subsequent investigation by the Justice Ayo Salami-led panel set up by the President.

In a tweet via her Twitter page on Friday, Ezekwesili condemned the abduction of 27 Kagara students from Niger State, adding that a strange incestuous relationship now exists between the government and abductors.

The ex-minister claimed the alleged friendship has enabled the industry of abduction to flourish in Nigeria on basic market principles of demand and supply.