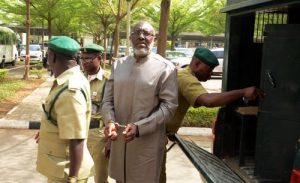 A former national publicity secretary of the Peoples Democratic Party (PDP), Olisa Metuh, has claimed that he fought so many demons while he was in prison.

Recall that Metu was arrested in 2016 by the Economic and Financial Crimes Commission (EFCC) and arraigned on seven counts of money laundering for allegedly receiving N400 million from the office of the national security adviser.

But in December 2020, the Court of Appeal acquitted him of all charges and nullified the seven-year jail handed down on him.

Speaking when some PDP faithful received him at the party secretariat in Awka on Wednesday, Metuh said he was treated worse than armed robbers in prison.

The PDP chieftain, who was received by Chief Ndubuisi Nwobu, State chairman of PDP and faithful, said his experience in detention has taught him a ‘great lesson’.

Metuh said he was grateful to God for seeing him through the years of trial which he described as a ‘descent into the deepest part of the valley’.

“Today I am vindicated and I must tell you that I descended into the deepest part of the valley and I fought with demons .

“I thank God for showing me mercy and I thank all the PDP gubernatorial aspirants and the party leadership for their support and concern during my trying times,” he said.

19 thoughts on “EFCC: How I Fought Many Demons In Prison – Metuh”