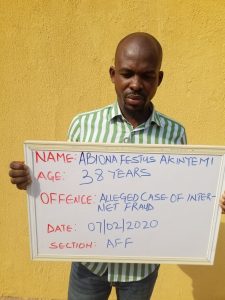 The 38-year-old accused was convicted and sentenced after he was dragged before the court by the Economic and Financial Crimes Commission (EFCC).

The convict was prosecuted by the Ilorin Zonal Office of the Economic and Financial Crimes Commission (EFCC) on a two-count charge of internet fraud.

Naija News gathered he was on the wanted list of the Federal Bureau of Investigations of the United States Department of Justice.

In other news, this online medium had earlier reported that a serving soldier has been arrested in Lagos for suspected internet fraud activities by EFCC operatives.