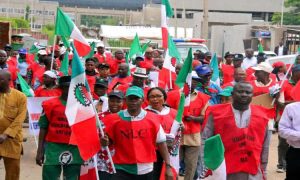 Governor Kayode Fayemi of Ekiti State has been accused by the organized labour in the state of neglecting workers welfare.

The union which comprises the Nigeria Labour Congress (NLC), Trade Union Congress, TUC and Joint Negotiating Council (JNC) in a statement expressed its dissatisfaction with the governor’s refusal to meet its demands, warned that it would embark on strike should the government within fourteen days refused to address the challenges.

Naija News understands that the worker’s association issued the Ekiti State government a 14-day ultimatum to be effective from Monday, July 20.

The union in the statement made available to newsmen on Saturday states their resolution following their meeting in Ado Ekiti on July 16, noting that Fayemi’s administration had turned blind eyes to the welfare of workers in the state.

According to the union, “it felt dazed and betrayed by the state government for not acceding to any of workers’ demand since the beginning of the lifespan of the present administration which is now close to two years. This is painful.”

The union challenged the government to address its needs else after the 14 days ultimatum, “workers shall embark on three days warning strike commencing in the midnight of Monday 3rd August 2020 without fail.”

Naija News understands that the unions’ statement includes “non-implementation of financial benefits arising from the letters of promotion given to all deserving workers from years 2015, 2016, 2017, 2018 and 2019 and advancement and government’s decision to petition the outstanding promotions for the years 2015, 2016 and 2017 and contemplating the implementation of 2018 and 2019 only.

“Non-payment of Leave Bonus for the years 2016, 2017, 2018, 2019 and 2020 to all deserving workers in the state; non-payment of special hazard allowance for health workers; and non-payment of deductions such as cooperative societies deductions, bank loan repayment, union check-off dues among other deductions in recent time by the present state government under the guise of the introduction of net salary payment”.