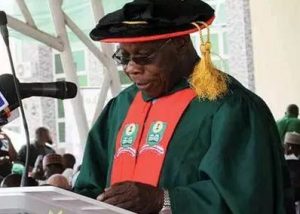 Recall that controversy had trailed the NBA conference with the theme, ‘Step Forward’ following the decision to withdraw the invitation, to Kaduna governor, Nasir El-Rufai to speak at the annual general conference.

This was following the outcry from lawyers across the country who threatened to boycott the event.

The lawyers cited his government’s failure to stop the killings in Southern Kaduna, and his alleged human rights record.

Reacting to the removal of his name, El-Rufai it as an “unfortunate embrace of injustice”.

He noted that he will continue to offer his opinions on critical issues in the country and his voice will not be silenced.

Following El-Rufai’s removal, the Jigawa, Yobe branch of the NBA, among others threatened to boycott the conference.

The president of the Muslim Lawyers’ Association of Nigeria, Ibrahim Abikan, also said both Obasanjo and Governor Nyesom Wike of Rivers were allegedly guilty of the same allegations filed against el-Rufai.

While other speakers including Vice-President Yemi Osibanjo and House of Representatives Speaker, Femi Gbajabiamila spoke the conference, Obasanjo did not while Wike sent a representative.

Confirming the development, Abikan told The Punch on Friday, “I can confirm to you that former President Olusegun Obasanjo did not speak at the conference while Governor Nyesom Wike sent his SSG to represent him.”

Also, Obasanjo’s Special Assistant on Media, Kehinde Akinyemi, on Saturday stated that the former military head of state did not attend or speak at the conference.

“Former President Olusegun Obasanjo was obviously not at the conference but I don’t know why he did not attend the event,” Akinyemi said.