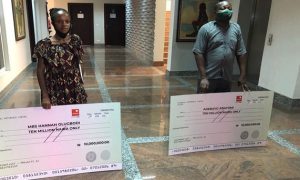 The Lagos State Judicial Panel of Restitution and Inquiry investigating cases of police brutality have awarded N10 million each as compensation to two victims.

The Chairperson of the panel, Doris Okuwobi, presented the cheques to the victims on behalf of the state government.

The two petitioners are Kudirat Abayomi, who was killed by a police stray bullet in April 2017, and Hannah Olugbodi, who ended up on a crutch after her left leg was shattered by a stray bullet fired by some men of the disbanded police Special Anti-Robbery Squad (SARS) in Lagos.

In November 2020, Olugbodi, a hairstylist, had narrated to the panel how a stray bullet from a police officer had shattered her left leg, and left her in crutches.

According to her, the incident happened in June 2018, while she was on her way to a market in Ijesha. She had alleged that the officers, who were members of the now-defunct special anti-robbery squad (SARS), had raided a hotel and shot sporadically, and she was hit in the process.

On his part, Abayomi had told the panel that on April 4, 2017, his mother was hit when SARS officers visited the Onipanu area of Lagos.

He also accused the police of abandoning his mother’s corpse on the bare floor of a mortuary.

“The DPO told me that he has given out money for embalming at the mortuary and that the next day we should come back for further hearing. So, when I got to the station, I visited the IDH mortuary, I met my mother’s body on the floor, swollen. The police didn’t embalm her as they had told me,” Abayomi had told the panel on December 2, 2020.

The panel compensated Olugbodi for the stress she had undergone and to enable her to receive medical treatment, while the panel ordered the police to write a letter of apology to the Abayomi family.

According to the panel, the compensation will also cover scholarships for Kudirat’s children. The panel also recommended the prosecution of the erring police officers in the case involving Abayomi.