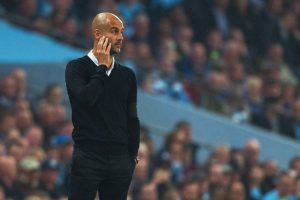 Speaking after a 2-1 loss to Chelsea in the English Premier League yesterday, City boss admitted his side failed to play desperately in the season as title rivals, Liverpool FC.

Naija News understands Liverpool FC on Thursday, June 25 were confirmed 2019/2020 English Premier League title winners, after ending the league with 23 points ahead of their contenders.

The Reds last night effectively ended Guardiola’s quest to win the league for a third consecutive year, after 30 years they last lift the EPL title.

Speaking in an interview after a tough game with Chelsea, Guardiola knowing fully Liverpool will be declared winners said, “Maybe we didn’t arrive with the same passion; Liverpool played every single game like it was the last chance they have.”

“And maybe we didn’t get that moment, especially the key moments in the first part of the season. That is the reality, that we are so far behind. Liverpool were fantastic in consistency throughout the whole season,” the Spanish coach added.

He reiterated, “We dropped points at the beginning of the season, and Liverpool didn’t drop points.

“We’ll have to recover for next season, to be more consistent, and recover the points we missed this season,” Guardiola told reporters after the game.

Naija News understands that Manchester City ended with 63 points in the EPL league, 23 points behind Liverpool’s.

Meanwhile, Liverpool has revealed that Nathaniel Edwin Clyne, better known as Nathaniel Clyne will be departing the club at the end of June 2020, Naija News reports.