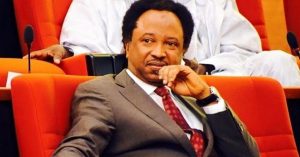 Former lawmaker, Shehu Sani has reacted to the confirmation of former Service Chiefs as non-career ambassadors by the 9th senate.

The President urged the lawmakers to give quick attention to the recommendation. Acting in accordance to Buhari’s request, the Senate President, Ahmad Lawan, directed the committee on Foreign Affairs to screen the immediate past service chiefs who had been nominated for appointment by the President.

Lawan gave the committee two weeks to conclude the assignment and present a report to the lawmakers during plenary.

Subsequently, the 9th senate on Tuesday, February 23 confirmed the appointment of the past service chiefs.

Reacting to the development, the Kaduna State senator, Sani in a post on his verified Twitter account said the ex-service chiefs are lucky it was not the 8th National Assembly that is in power.

His tweet reads: “The Ex Service Chiefs would thank their God that it’s not Our 8th Senate.”

Meanwhile, thirty-one foreign missions in Nigeria have been charged by a coalition of civil societies to disqualify the immediate past service chiefs and also declare the former service chiefs as non-grata in their countries.

The coalition forwarded the petition to the foreign missions through their Ambassadors and High Commissioners as well as the Head of the European Union Delegation to Nigeria and the United Nations.

The coalition said the step was taken due to the alleged war crimes, massacres, and gross human rights violations perpetrated by the former military chiefs, particularly Buratai, under whose watch the Obigbo, Lekki, and Zaria massacres, among others, took place at various times.